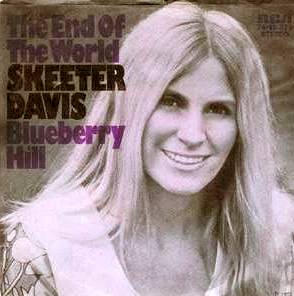 This week on ‘Pop Goes The Country,’ we explore a hit song where the title alone strikes a note of irony for the artist who recorded it.

That artist is known as Skeeter Davis, though she was born as Mary Frances Penick in Dry Ridge, Kentucky. She began her singing career with a schoolmate named Betty Jack Davis in a duo they dubbed the Davis Sisters (Skeeter took Betty’s last name despite there being no relation between the two). While Davis’s big hit single in question today, “The End of the World,” would end dominating country and pop markets, with the Davis Sisters, she and Betty Jack were associated with bluegrass acts like Flatt and Scruggs first and foremost.

The Davis Sisters signed with RCA Records in 1953, though in August of that year, Betty Jack was killed in an automobile accident that also injured Skeeter and left her physically and psychologically unable to continue her career.

Davis would prevail, obviously, but it was another mark in a life filled with turmoil for her. To give a few examples, when Davis was a toddler, her great-uncle was convicted of killing her maternal grandfather in Indiana, causing her mother to sink into depression. Unsurprisingly, following Betty Jack’s death, Davis herself sank into depression, though she prevailed as a solo act.

As such, it’s no surprise to hear Davis gravitate toward a song called “The End of the World.”

If you remember correctly from past editions of this series, since we’re still discussing the “Nashville Sound” era, you might recall there were three men responsible for what went on behind the metaphorical curtain – Chet Atkins, Owen Bradley and Don Law. While Law has been a primary focus of the past few editions, Davis’s career centers mostly around Atkins.

Atkins had played guitar on nearly all the Davis Sisters’ RCA sessions. By 1958 Atkins ran the RCA Nashville recording shop. Suspecting Skeeter’s voice had broader potential, he multi-tracked her vocals to echo the Davis Sisters sound. Something must have clicked, as between 1959 and 1962, she had a series of Top 10 and Top 20 hits on the Billboard Country chart including: “Am I That Easy To Forget” (1960); “(I Can’t Help You) I’m Falling Too” (1960), “My Last Date (With You)” (1961), and “Where I Ought to Be” (1962), a few of which fell into the popular “answer song” category of the time, another discussion for another piece.

There isn’t much to say about Davis’s inevitable monster hit that would come in 1962, but it shares a similar heartbreaking background to Davis’s story. Written by composer Arthur Kent and lyricist Sylvia Dee, the song largely drew on the latter’s death of her father, with her writing the lyrics when she was 14 years old.
Despite never reaching the No. 1 position in country music, “The End of the World” still made history. In March 1963, the song hit No. 2 on both the Billboard country and pop charts, and it also hit No. 4 on the Billboard R&B chart and went to No. 1 for four weeks on the Billboard adult contemporary chart, thus making it the first, and, to date, only time that a song cracked the top 10 (and top 5) on all four Billboard charts.

With 25 volumes of this series written and published, I’m surprised this is the first one where I’ll be addressing the ever-growing divide between country and pop music and how it affected this song’s success. Davis expressed frustration when some of her country music fans accused her of selling out when the song became a big hit on the pop charts. For Davis, this exposure was good, as it meant she could expose country music to a broader audience, even if her and her fans may have had different opinions on the definition of country music.

It’s a debate that certainly has made its way back around in 2019, but as for this particular song’s impact, in later years, “The End of the World” came to be regarded as something of a modern standard, subsequently covered by acts as diverse as Loretta Lynn, the Carpenters, Nancy Sinatra, Johnny Mathis, and John Cougar Mellencamp. Fittingly, too, “The End of the World” was also played at Chet Atkins’s funeral in an instrumental version by Marty Stuart, and at Davis’s own funeral in 2004 at the Ryman Auditorium. Join me next time on ‘Pop Goes The Country’ where we’ll go chug-a-luggin’ with Roger Miller and see why he was the “king of the road.”