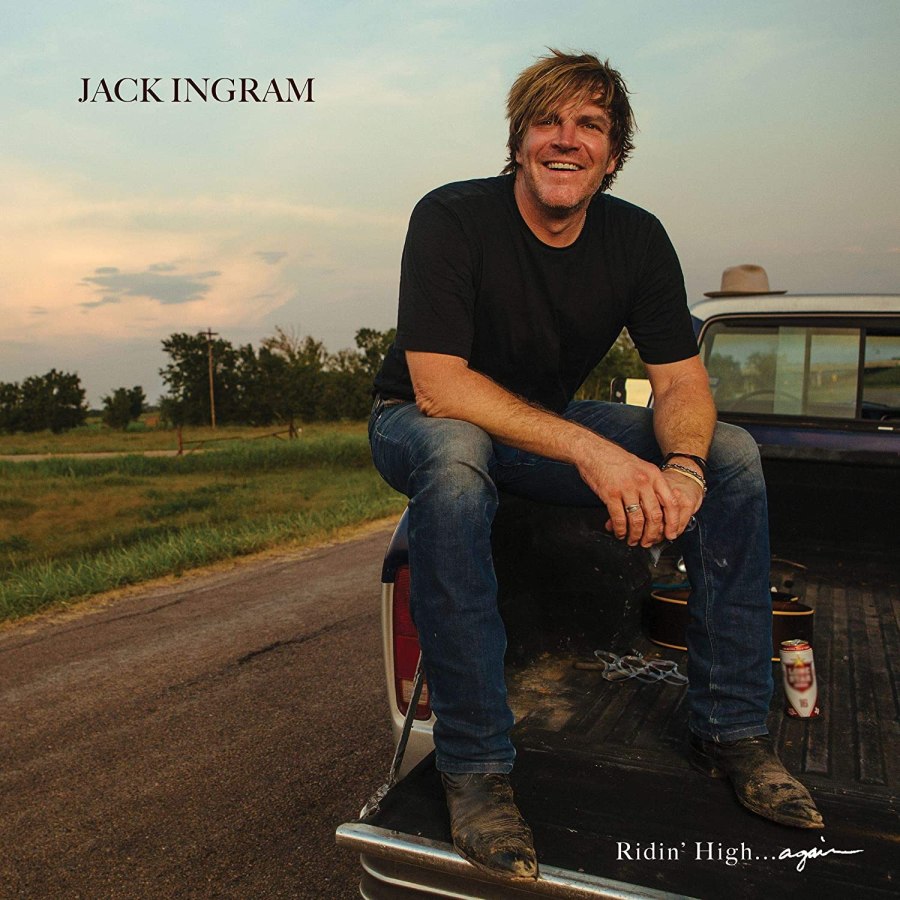 The short version: ‘Ridin’ High … again’ doesn’t set out to be perfect or anything other than a Jack Ingram album, and I wouldn’t have it any other way.

The long version: I hate to be redundant following the Randy Rogers Band this week, but it looks like we’re once again returning to the familiar story of the Texas musician who tried to make it in Nashville.

Actually, no – we’re past that. I might not have personally “got” Midnight Motel, but there was no denying it showed a different side to Jack Ingram. At that point, Ingram made the music he heard in his head and unlocked those thoughts for all of us to hear, commercial appeal be damned. It was a weird album that defied the traditional album concept with witty banter, long, drawn-out moments, and a more charismatic front man behind the microphone.

I bring up Midnight Motel because, if you liked that album, Ridin’ High … again essentially goes for the same concept – a breezy, booze-filled album that sounds more like someone just having a good time for the sake of the music over anything else. It’s far from perfect, but it’s those imperfections that make it the complete experience, just as what happened on his last album.

Yet this album is not Midnight Motel, despite the similar approaches. The witty banter is more condensed, favoring more electrifying (or moody) solos and quick one-liners at the end (or within the actual songs) over stories leading into other stories. The approach is more akin to what you’d expect out of a Texas-country record in the vein of Jerry Jeff Walker or Guy Clark over the folk tendencies of Midnight Motel – barroom piano, crunchy electric guitar lines, some pedal steel or fiddle every now and then to accentuate the grooves, and rollicking percussion to keep it loose and easy.

And as a whole, I’d argue it suits Ingram’s style even better. Despite the large amount of covers on display, Ridin’ High … again is truly where Ingram comes full circle with his artistic roots to craft something excellent. It’s still an album that defies expectations, and it’s quickly helping to define Ingram as one of the top artists right now.

At its core, Ridin’ High … again has a strong live album feel to it, with a strong focus on booze-riddled uptempo numbers and moodier reflective tracks to balance everything out. It helps that Ingram’s charisma is stronger than ever before, as it help immensely when it comes to the cover songs.

And no, not all of the cover songs work here. This is far from a perfect album, and while I’ll lay all those criticisms out further down the line, I’ll also say that’s part of the point. The album itself is a nod to Walker’s Ridin’ High album, which also was a mixture of original tunes and cover songs. The imperfections come at the cost of making an album that sounds like it was made out of a love for music rather than smoothed over to the point of losing that passion.

Anyway, the Delaney & Bonnie cover of “Never Ending Song Of Love” really doesn’t fit the album’s vibe, but on the other hand, Ingram’s cover of Clark’s “Desperadoes Waiting For A Train” is second only to Clark himself. Ingram himself often slurs his deliveries or imbues them with the kind of thought-provoking, poetic passion that’s hard to emulate. He just “gets it” when it comes to this particular song.

If there’s any theme to the album, it’s to live and let live … in a more interesting way than what was just described, of course. I don’t want to say lyrical content doesn’t matter here, because that would discount some incredible songs in the latter half. For the most part, though, the focus is on the presentation behind it all, which circles back to Ingram again.

“Alright, Alright, Alright” and a cover of Walker’s “Don’t It Make You Wanna Dance,” for example, are not going to compete for song of the year distinctions, but they’re filled with enough frenetic energy and sharp grooves to keep the party going.

The covers and original tracks are mostly sequenced excellently, though “Shooting Stars” was easily the better album closer over Kris Kristofferson’s “Jesus Was A Capricorn,” an odd track that’s included here to fit with the modern times and just … doesn’t. After the first two tracks, “Staying Outta Jail” is filled with the same drunken wisdom and laid back atmosphere of a Robert Earl Keen track to make it feel like Ingram is telling you a story face-to-face. Then all of a sudden, “Desperadoes Waiting For A Train” is the first moment where the fun stops and Ingram hits you like a ton of bricks.

That’s largely how the album runs. It has a little bit of everything, but it always hits you at just the right time with the right amount of variety, something lacking from his last project. In terms of covers that outpace the originals, however, Ingram’s hard-charged take on Hayes Carll’s “Down The Road Tonight” certainly fits the album well, especially with Ingram’s banter all throughout the track. “Tin Man” isn’t really a cover, but even this raw take on it backed only by dobro carries even more emotion than the still excellent original take by Miranda Lambert.

But if there’s any place where the true discussion needs to take place, it’s on “Sailor & The Sea” and “Shooting Stars,” easily two of Ingram’s best songs to date. Again, Ingram has charisma, but it’s his poetic moments where he truly shines. This is an album where, beneath the hard living and stories, the tributes to Ingram’s heroes are also subtly there. “Sailor & The Sea” is a touching ode to Ingram’s father, but it’s also a nod to Clark. It’s a nearly 10-minute song, yet it doesn’t feel like it. “Shooting Stars” ironically finds Ingram reflecting on artist Waylon Payne and Ingram’s shock at how Payne never “made it” despite the talent being there. Of course, Ingram’s been on that end before too, and it’s a good reminder that not all stars necessarily need the biggest stages to still burn bright. More than just the poetry behind them, these tracks truly excel on Ingram’s deliveries.

On the other hand, while I do like the bluesy drawl of “Where There’s A Willie,” it’s the kind of joke that everyone, artist and fan, has likely thought of at some point and only didn’t make into a full-length song for obvious reasons. It’s corny, but it’s still got a goofy, endearing charm to it, and that counts for something I guess. “Everybody Wants To Be Somebody” is probably the one moment that doesn’t contribute much to the album’s atmosphere next to “Never Ending Song Of Love.” Compared to other tracks, it’s stiff and repetitive without the excellent solos or other instrumental flavor to make it worth it.

But as I said before, a lot of this album’s flaws are also its strengths. The songs all run long, but they never feel like it. The atmosphere is loose and breezy enough to make it a fun album while still balancing it out with substance, and in terms of pure personality, no one is currently beating Ingram. Ridin’ High … again isn’t made to be perfect or possibly even for critics, but like with Midnight Motel before it, it’s the album Ingram wanted to make. This time around, I’d say Ingram hit his mark entirely.