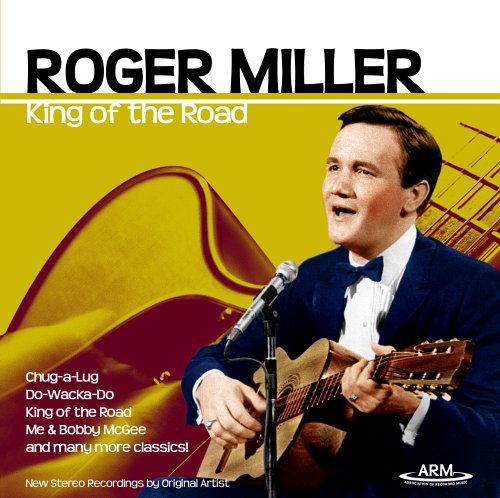 Roger Miller was described as many things in his lifetime, but few could capture what he truly was – a genius.

That genius was formed in Fort Worth, Texas in 1936 until Miller was sent to live with an uncle in Erick, Oklahoma when he was three. Miller would often joke that Erick’s population was, “1,500, and that includes rakes and tractors.” Like any budding country artist, Miller became enamored with the music of Hank Williams and Bob Wills and would drift from town to town in Texas and Oklahoma as a teenager trying to land a nightclub gig.

Fate had other plans, however. Drafted during the Korean War, Miller’s material written during his time in the service, as described by his military friends, was, “uniquely whimsical, humorous and off-the-wall.” In fact, his writing and performing talent was soon noticed by the military brass, and Miller was transferred to “Army Special Services” where he was chosen to play fiddle in a band called the Circle A Wranglers. While stationed there, he met Bill Anderson, and the two young, future country stars would form a lifelong friendship.

Of course, Miller would have to make his way to Nashville in order to fulfill that prophecy, which he did after his discharge from the service in the mid-’50s, working as a bellhop in one of the city’s posh hotels, all while making friends with struggling writers.

One of Miller’s first big breaks was when Ray Price selected one of Miller’s tunes, “Invitation To The Blues” as the B-side to Price’s own “City Lights,” written, humorously enough, by Bill Anderson. To put a long story short, the door for Miller’s future success was now wide open, though many often thought Miller was crazy for wasting time on compositions just for laughs. Over time, his work seemed to carry no commercial value to anyone, making even the most asinine novelty song seem like Shakespeare in comparison. His critics weren’t necessarily always wrong to call him crazy.

Despite finding a few hits at RCA Records, his career there never quite panned out, and by 1963, Miller was ready to quit Nashville to pursue an acting career in Los Angeles. As you might recall from my piece on Jimmy Dean’s “Big Bad John,” Miller mostly found his breakthrough via the television. Ironically, to help fund his move to Los Angeles, Miller hastily recorded 16 songs for producer Jerry Kennedy at Mercury-Smash Records in 1964, would which later yield him two hit country songs in “Dang Me” and “Chug-A-Lug,” tunes that only furthered his zany reputation.

The Smash Records connection is important, though, as they saw something in Miller the rest of the country music establishment had missed. When he went on tour, people enjoyed a Roger Miller show best when he could make them laugh, to the point where he was as much a stand-up comedian as he was an artist. Sensing some value in his work that others had not, Smash Records took the chance to release “Dang Me,” complete with a bizarre, nonsensical chorus line and a mostly dialogue-driven verse. Not only was it a five-week No. 1 on the country charts, it even crossed over into the top ten on the rock charts.

After the success of “Dang Me,” Chug-A-Lug” and “Do-Wacka-Do,” Miller’s fourth Smash single (pun intended because, come on, it’s a Roger Miller piece), would become his signature hit. In order to write it, however, Miller would draw on two of his own life experiences. The first was that poverty had been a core part of the first 20 years of his life. The other was the strange gypsy lifestyle which he lived as an entertainer before his big break. In his first years out of the army, Miller barely held any job for more than a few days at a time, bumming anything he could off people from ketchup sandwiches to cigarettes to watered-down coffee. But part of Miller’s genius was that, in essence, he was a child at heart, never losing hold of his sense of optimism or adventure. Ironically, despite now being able to field offers for his own network television show and having more money than ever before, he felt more in control when he was struggling, if only because there was so much power in being able to run your own world and depending on no one else. “King Of The Road” today is known as one of the catchiest ditties known to man, but it was Miller’s story that dealt with his dark side in an upbeat fashion.

Of course, by writing “King Of The Road,” not only did Miller turn the country music tradition of hobo songs upside down by celebrating them in this upbeat fashion, he also, ironically, gave hope to people. Country music fans hearing “King Of The Road” just as it came out were people who had grown up during the Great Depression, so “King Of The Road” represented “the good old days.” And to a younger audience hopped up on rock ‘n’ roll, there was a sense of desire and adventure to the lyrical content.

In just five weeks, “King Of The Road” reached the No. 1 position on the country charts and would hold that position for five more weeks. He was finally understood, almost too well. Join me next time on ‘Pop Goes The Country’ where we’ll discuss something else strange, the Statler Brothers’ “Flowers On The Wall.”