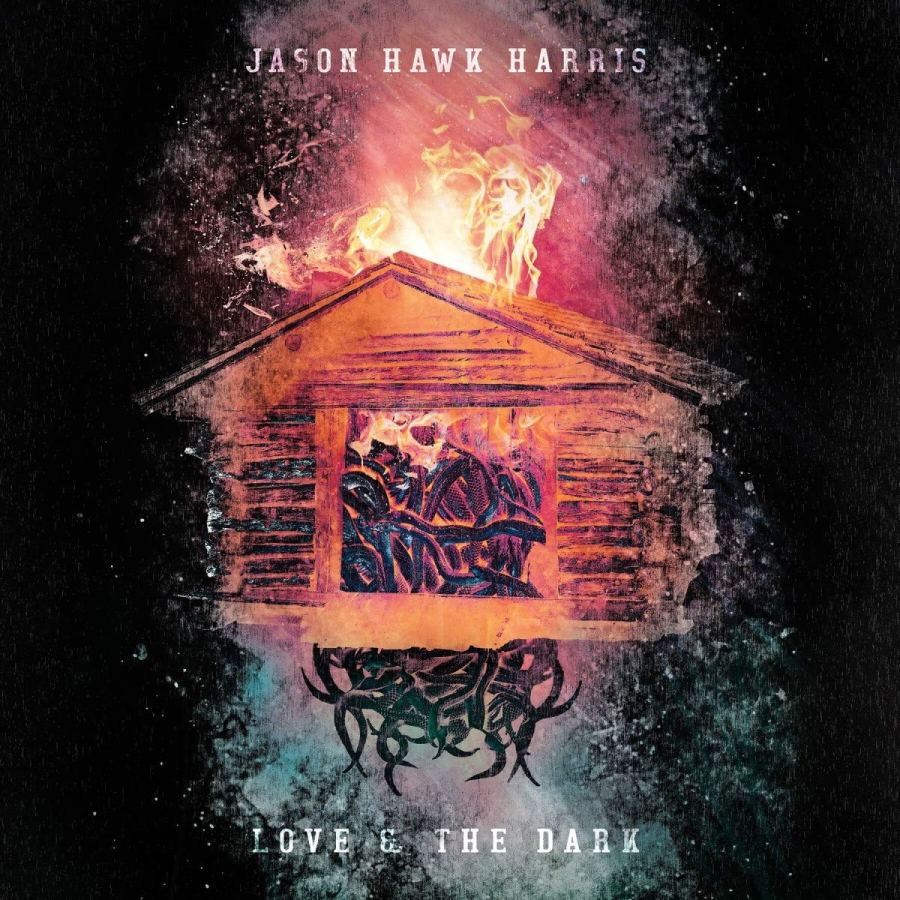 The short version: ‘Love & The Dark’ continues 2019’s hot streak of fantastic debut albums. In this case, the allure stems from Jason Hawk Harris’s embrace of the macabre and a sonic palette that pushes country music in an exciting direction.

The long version: I’ve said before that 2019 is ripe with debut albums, to the point where beginning reviews with this discussion is beyond cliché.

Now, typically, a huge arrival of new entrants to the format signals that many older artists are on their way out, especially in country music. Of course, unlike, say, the early 1990s, 2019 is a year where the independent scene is only gaining more traction, subsequently erasing the traditional borders that come with limited airtime slots at radio. Not to say that the Internet age hasn’t had its downsides for the music industry in general (another conversation for another time), but it’s certainly helped certain artists with no major label support eclipse the sales and overall impact of artists with No. 1 singles, commercially.

Artistically, however, it’s also lifted the parameters of what artists can say with their debut albums, which really does speak to why there’s been an incredible volume of great music this year (though some may argue this part of the conversation hasn’t changed much).

So let’s add another name to that ever-growing conversation – Jason Hawk Harris – a Houston-raised performer whose musical upbringings included everything from country to classical music. And while a 2017 EP did eventually surface for him, his debut album, Love & The Dark, took longer to get here than originally expected. Sidetracked by complications from his mother’s death from alcoholism, his father’s bankruptcy from being sued by the King Of Morocco, and his sister’s multiple sclerosis diagnosis coupled with her giving birth to a son with cerebral palsy, Love & The Dark is nothing, if not Harris’s introduction to the country music world in his own way.

And yes, that does mean Love & The Dark is unlike pretty much any other album you’ll hear this year. But with Harris’s knack for melodic flourishes and production touches that put a progressive spin on country music (you know, in a way that actually feels progressive), Love & The Dark is also a more exhilarating listen than one would expect. As for whether it continues that aforementioned conversation of fantastic debut albums, the answer is a resounding “yes.”

Vocally, I don’t think I’m the first critic to compare Harris to Jason Isbell – both expressive country singers who, despite limited technical ranges, throw every bit of themselves into their material. Beyond the direct comparisons, though, Harris’s knack for stellar melodies means his vocal flow is quite solid, and there’s many moments you don’t expect to hear him soar as vibrantly as he does on some of the hooks here, particularly on “The Smoke & The Stars,” or the ending choruses of “Cussing At The Light” and “Giving In.”

As mentioned before, too, Love & The Dark feels like a true embrace of country music roots with a progressive approach. Not to bring up that debate, of course, but even in terms of pure sound, there isn’t much that sounds like Love & The Dark, currently. And what’s even more surprising is that it does this on a seemingly limited sonic palette – with touches of reverb for a more atmospheric swell, pedal steel to accentuate said atmosphere, fantastic piano lines that help the album’s melodic foundation, and hints of dobro and strings for added accents elsewhere.

Basically, it’s a prime example of using what you have and doing something completely different with it, or, at the very least, doing more than what is otherwise expected. “Cussing At The Light” is a tad more basic, lyrically, than I’d otherwise prefer, but it takes the typical honky tonk sound and cranks it to 11 with just how much energy it has, both from the instrumentation and from Harris himself. And then there’s “Confused” and “I’m Afraid,” which play to typical rockabilly chord progressions, yet are amplified by thunderous percussion to really drive the maddening grooves home. Also, to repeat myself, the strong piano lines certainly help to keep the energy going, particularly the solo on the latter track.

For as hard-charged as this album gets, however, it’s the moments that build up to something more that are the most rewarding. “Giving In” may be simpler than other tracks here with the slicker guitar line, but it’s definitely got the most rollicking melody to it. And it’s the smaller details that help that track stand out, like how the percussion accelerates during certain lines for added emphasis. “The Smoke & The Stars” mostly builds off those touches of reverb to build up to that huge hook, and the payoff is worth it. But it’s the closer, “Grandfather,” that’s most surprising, ending with a mix that’s almost symphonic in its approach, and certainly reflects Harris’s upbringing of classical music. There’s not much to say beyond how the interweaving of violin, xylophone and drums that crash with the most thunderous of roars ends this album on one of the most beautiful-sounding notes you’ll hear this year.

Yet on first glance, you wouldn’t expect this album to end on the brighter note it ends on, with Harris mostly spending his time exploring religion and his own psyche throughout this album. Lyrically, it’s dark and heavy, and while the brighter tones scattered throughout could feel odd balanced against that, that’s also largely the point. Harris is faced with bouts of substance abuse, death and his own coping mechanisms, and while it’s summed up best in one track, “Confused,” he mostly doesn’t even have the time to catch his breath and analyze the situation. And even despite that glorious melody, Harris never sells something like “Giving In” with anything less than a serious performance, with an emphasis on the line, “Babe I don’t want to do it again.” Even on that track, for as much as he tries to kick his habit, it’s to no avail, and he’s not even shocked or blames his significant other for walking out on him because of it. You even get the feeling that he feels a sense of relief from knowing he can now sink further down without anyone else getting in the way at that point.

And that wild sense of abandonment and recklessness does speak to a numb sense of nihilism that, yes, I do personally like. But while Harris is confronted with the feeling that everything is going to be alright eventually, he never looks at it as anything more than a false promise from high above, with him questioning religion without outright mocking it or even bringing up God in the conversation; it’s an honest reaction.

It’s especially honest when part of his fear of embracing the unknown comes from a childhood fear of seeing pictures of Jesus Christ on “I’m Afraid” that, ironically, instilled the biggest sense of unease in him. And again, that track is a blast, sonically, embracing the kind of upbeat gospel stomp that, not only nails the tonal choices, but also is a wonderful example of a track being too on the nose in its execution.

Again, though, there’s never an outright rejection of the idea of something more. Despite the hardships he faces, there’s still something about the power of having someone else to love that makes life itself worth exploring. Harris still wants answers, after all. He knows he can’t just rush into things on “Confused,” but he also questions waiting to seize that moment when he doesn’t know if he’s got beyond today. And “Blessed Interruption” doesn’t even give him to time to process his mother’s death; he’s got to deal with making sure the church has good sound for the funeral, pick out the flowers and the music. Again, he’s never one to mock someone else’s faith or their views, but there is something to be said for how much the grieving process involves putting on a show rather than allowing time for pure remembrance or healing.

But the album comes to a climax, thematically, in two tracks – one being “Phantom Limb,” where the realization finally does hit him that his mother’s dead and that a part of his life is over, and “Grandfather,” where he’s confronted by a vision of his grandfather from beyond. Before his grandfather can even utter one line, it takes three verses of Harris asking questions with the excitement of a child on Christmas who can’t believe what he’s witnessing. But again, the song never once mentions Heaven or even the idea of it, and Harris never asks about what life is like afterward. He only wants to see his mother again and know her pain is truly over, and when he does, that instrumental outro kicks in and ends the album on a majestic, cathartic high note.

It’s going to sound like pure nitpicking, but part of my criticisms of Love & The Dark come through in the sequencing. “Red Room Blues” really is a disappointing track to lead into “Grandfather,” and really should have been replaced by “Phantom Limb.” That also speaks too, though, about how “Red Room Blues” opts for a lighter, humorous, and almost nonsensical note that doesn’t fit with the rest of the album, especially with how short and underdeveloped it is, and especially when it’s leading into one of the best tracks here.

And while “Phantom Limb” is an excellent track in its own right, it ends with an overlong guitar solo that falls flat for me, personally. Going back to the sequencing, too, Love & The Dark can, at times, feel more like a puzzle to be solved rather than tell a cohesive story, even if “Grandfather” was absolutely the best way to end the album.

Still, to repeat myself, Love & The Dark is unlike any other album you’ll hear this year, and that old cliché is actually true in this instance. The sonic palette pulls from a lot of old school honky tonk and rockabilly, yet leans into heavier textures than otherwise expected. Harris often surprises the listener with how much power he carries, vocally, and never fails to deliver these tracks with anything less than the right amount of intensity. The songwriting may turn off some people in places with its heavier embrace of the macabre and religious iconography, even if this is purely Harris’s journey of redemption. But if so, listeners will only deprive themselves of one of the best debut albums of the year. Love & The Dark isn’t an album that could be made again, but it does show a lot of potential in Harris that should make anyone excited for the next project.