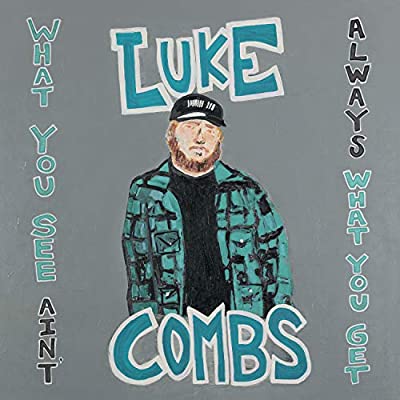 This was initially going to be a longer post, but since All Access doesn’t seem to have Garth Brooks’ take on “Shallow” available in their database – and since I’m not about to sign up for Amazon Music just to hear it – I’m left to my imagination over how subpar and overblown it likely is. And that’s a note on Brooks himself, who finally announced a November release date for his Fun album – two and a half years after its initial announcement. Well, the cover is fitting in name, then, but given how Brooks has handled his comeback in general since 2014, I’m not exactly sad that I’ll likely end up skipping it or the album altogether.

Anyway, it’s a light week (as far as country music goes, at least – otherwise …), with only new releases from Luke Combs and Michael Ray taking up this edition, both are which are decent, but little more than that. Onward!

Over the years, I’ve gone from being against Luke Combs to finding him as a likeable enough ambassador for the country music genre … and now I’m somewhere in the middle, not quite finding him overrated, per se, but also beginning to grow weary of his approach to new releases. Granted, it’s a smart marketing move all around – I can’t deny that – and I’m not surprised that one of the new singles from the recently released deluxe edition of his latest album in What You See Ain’t Always What You Get almost had a shot at the No. 1 position on the Billboard Hot 100. Yes, No. 1, only held back due to Ariana Grande’s Positions, and that’s a huge note on how meteoric Combs’ rise has been thus far.

Again, though, as far as the actual song goes, I’m somewhere in the middle. On one hand, it’s a blatant rewrite of his current country airplay single in “Better Together,” playing to a slightly more energetic sound in the electric guitar pickups, which sound about polished as one would expect for Combs at this point. Still, I like the pedal steel, piano and mandolin pickups that also creep in for an overall organic sound, and I can’t deny how much Combs invests himself into his material. But the song is a laundry list of things that wear out quickly that work to sell the sentiment and significance of his everlasting love for his partner, and also draw it out far past its expiration date (we know blue jeans fade and people eventually drink every ounce of beer in a can, but it’s a weird turnaround to sell a sentiment revolving, ultimately, around actual, you know, people). Again, I like Combs. Heck, he recruited Amanda Shires for one of the new tracks on his deluxe album. But I also know that there comes a point when A-list acts maintain their longevity by retreading the same ground over and over, and while it’s certainly working here, it’s not really that exciting or memorable. In other words, it works for now, but I’d be surprised if this ends up sticking around “forever after all.” (Light 6/10)

You don’t need me to tell you that there are a lot of interchangeable male country acts working within the mainstream right now, and that the divide between radio success and actual success is larger than it’s ever been. Heck, Jameson Rodgers and Matt Stell are new acts with No. 1 hits under their belts, and if you’ve never heard of either one of them, I can’t blame you.

Of course, these acts are also usually only here for a good time, rather than a long one. As such, while I always thought Michael Ray possessed a fairly compelling voice, I was only inspired to check out his new single after hearing some promising buzz behind it, if only because his few singles in the 2010s were among the worst of that decade. This pivot is a bit unsurprising as a whole, though; Ray has always expressed a love for traditional country icons like Keith Whitley and Ricky Skaggs, even if it’s never been reflected in the actual music. With his chart success being a bit more inconsistent these days, though, I guess he’s figuring it’s best to just swing for the fences with “Whiskey And Rain,” because it’s easily the best single he’s put out yet. Now, I wouldn’t say that means it’s great – it’s a pretty basic “drinking to forget you” song, all things considered, with not a lot of actual details into what went down. And for as good as Ray sounds, he sounds a bit emotionally disconnected from the real bite of the sentiment. But as far as the actual sound goes, there is something to appreciate about the Chris Young-circa-2010 blend of thicker electric axes, fiddle, bass and pedal steel for a mix that’s fairly warm, melodic and organic, if a bit too slick in the overall production balance for its own good. I’d want to hear more from Ray before coming around on him, but this isn’t a bad start. (Strong 6/10)