This is the first light week we’ve had for this feature, and I’m not complaining about it one bit. Anyway, onward!

I’m going to roll up my sleeves and take a swing at this new Florida Georgia Line album, because it’s a special kind of disaster that requires a lengthy discussion – and not so much about the music itself, really. Kind of seems like a sign of the times that they released a new album and no one seems to care, though, no? Otherwise, I might put Mac Leaphart’s Music City Joke in the backlog for a future review roundup. 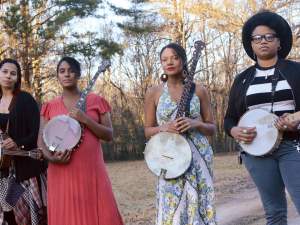 Not quite music news, I know, but it’s worth noting that Kellie Picker has been named as a USO Global Ambassador by the United Service Organizations. (Sounds Like Nashville)

“things are happening, y’all! getting closer & closer to new music being released.. can’t wait for y’all to hear what we cooked up in the studio a few months back.” – Charlie Worsham, on Twitter.

Speaking of Worsham, he’s featured in a new studio music video for Eric Church’s “Heart on Fire” – and the song, for the record, absolutely rocks – eating a banana. At least someone is having fun this year.

Speaking of new music, Rhiannon Giddens will release They’re Calling Me Home on April 9 (No Depression), Brandy Clark will release a deluxe edition of her 2020 album Your Life is a Record on March 5 (CMT), Ashley McBryde will release a live EP, Never Will: Live From A Distance, on May 28 (Music Row) and the Vandoliers will release a new single, “Every Saturday Night,” on Feb. 26.

Tanya Tucker is working on the follow-up to her 2019 album While I’m Livin, once again with Brandi Carlile and Shooter Jennings at the production helm. (Rolling Stone)

I’m 99% against using Twitter as a news source or basis for journalistic pieces, but worth noting something within that 1% – In a classy move, Jason Isbell is donating his share from Morgan Wallen’s Dangerous: The Double Album (that he’d earn from Wallen’s take on “Cover Me Up”) to the Nashville chapter of the National Association for the Advancement of Colored People.

In the “I-should-have-included-this-last-week-and-hate-that-I-missed-it” category, Rodney Crowell has released a new album, Songs from Quarantine Vol. 1, available on Bandcamp for $13 for the next week, and features contributions from Elvis Costello, Ronnie Dunn, Emmylou Harris, Rosanne Cash, and more. The album benefits the Music Health Alliance, a charity Crowell has supported for years, which aids struggling musicians worldwide. Download the album here. (Variety)

Dwight Yoakam is suing Warner Music Group for failing to return the copyrights to his songs (“Miner’s Prayer,” “Honky Tonk Man,” and reportedly more to come) from his 1986 Guitars, Cadillacs, Etc., Etc. debut, per Section 203 of the Copyright Act. Long-story short: It’s a provision of the United States Copyright law that states that after 25 years, original authors can cancel the copyright grants signed away to others and reclaim them for themselves. “Miner’s Prayer” and “Honky Tonk Man” specifically have disappeared because they were released as singles ahead of the album, meaning that it’s likely possible more tracks will disappear soon. If you don’t own a copy, and you really should, somehow grab one now before more tracks disappear. (Billboard)

Taylor Swift is releasing a new version of her sophomore album, Fearless, which will include 26 songs in total, six of which have never been released. Why? Because the recordings she made originally were made at a different time and under different legal and contractual obligations: She doesn’t own the master recordings of the songs on that album, which follows a dispute with her former label home, Big Machine Records, from 2018. (CNN)

Random but cool: Jamey Johnson and the Mavericks’ Raul Malo collaborated on a cover of “To All the Girls I’ve Loved Before,” made famous by Willie Nelson and Julio Iglesias.

One of country music’s most iconic drummers, Richie Albright, known best for his work with Waylon Jennings, has died at the age of 81. (The Tennessean)

For my Nashville readers, The Country Music Hall of Fame has announced a new exhibition, “American Currents: State of the Music,” set to open Friday, March 12. The exhibition will explore the music and events that shaped the past year in country music, and will recognize, among so many more artists, Mickey Guyton, Charley Crockett, Luke Combs, Jimmie Allen, John Prine, and Rissi Palmer. (Country Music Hall of Fame)

UPDATE: Tracy Lawrence has announced a new project to coincide with his 30th anniversary in country music, Hindsight 2020. The 30-track project will be released throughout 2021 and will feature, ultimately, a mix of new material, collaborations and some of Lawrence’s favorite hits. (That Nashville Sound)

“Religious hymnals, field songs and slave spirituals were incredibly influential in the early beginnings of country music. Many songs arranged by black people were later turned into hit songs sung by white artists. For example, a black minister wrote a hymn, ‘When the World is On Fire’ which was then turned into the Carter Family’s hit, ‘Little Darling, Pal of Mine.’ James A. Bland, a black New Yorker, penned the song, ‘Carry Me Back to Old Virginny’ which later on became the official state song of Virginia. Had he been alive in 1940 when it became the official state song, he would not have even been welcome in the state.” – A quote that speaks for itself, Haley Moloney, in a nice, short history on black artists within country music, written with contributions from Marcus K. Dowling, Rissi Palmer, and Shelley Hamilton. (Women of Country Music)

I can’t find anything to quote here without groaning at how it’s not so much a music feature as it is a lengthy lifestyle piece, but in a new, shall we say, “interview” with Rolling Stone, Kacey Musgraves has announced a follow-up album to 2018’s Golden Hour, set to be released this year, which will reportedly explore her divorce, the state of America, the pandemic and more. Ian Fitchuk and Daniel Tashian will once again assist with production. There’s also discussion of a new song on the album, “Star-Crossed.” (Rolling Stone, by Alex Morris)

Paul Robson (of Guitar Magazine) wrote an interesting examination of Emmylou Harris’ groundbreaking 1995 album Wrecking Ball, which reinvigorated her career and went on to inspire countless artists. For those who enjoy behind-the-scenes looks at things, it’s worth the read.

“This has all been kind of a backwards way to do it, but there’s been absolutely nothing conventional about my music career. But I like it that way. I like being able to do what I want to do on my terms much better than being thrown into something where it feels like I’m just by the seat of my pants.” – Natalie Hemby, who announced this past week that she’s signed with Fantasy and will release a new solo album this year. The album would follow 2017’s Puxico, but it won’t be country, per se – rather, a “Sheryl Crow, Shawn Colvin, Paula Cole, Lillity Fair, 1997-sounding record.” (Variety, by Chris Willman)

I’m still in a Kris Kristofferson mood, and these Farce the Music memes about him pretty much made my week. (Farce the Music, credit to Trailer Parkman)

Lastly, I teamed up with Nathan Kanuch (of Shore2Shore Country) to discuss some favorite country music literature, and it turned into a huge post that, at least to us, represents a nice country music library. If you’re interested, and I hope you check out both it as well as some of the books listed, click here.