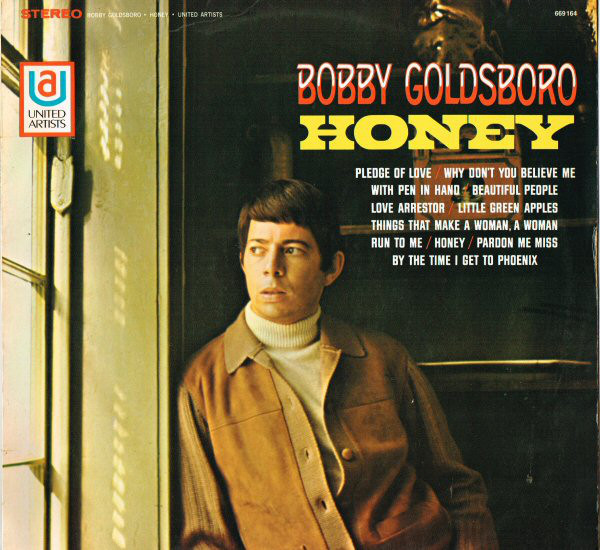 If the name, “Bobby Goldsboro,” doesn’t ring a bell to you, the country music fan, that’s certainly understandable.

A one-time member of Roy Orbison’s band, Goldsboro gained popularity in pop music first and foremost, charting songs such as “See The Funny Little Clown” and touring with with the Beatles and the Rolling Stones on their first American tour.

However, success for Goldsboro faded quickly after ” … Clown,” and Goldsboro wouldn’t reach the top ten again until 1968 when he recorded the song, “Honey,” infiltrating both pop and country music this time around.

“Honey” came with a catch, though. The song’s writer, Bobby Russell, struck a deal with Goldsboro and his manager, Bob Montgomery, saying that Goldsboro could only record the song when he gave the green light to release it. Before he’d do that, however, he wanted to see how former Kingston Trio member Bob Shane’s version would fare on the charts. It wasn’t uncommon for country music artists in these days to record their own versions of popular hit songs in order to capitalize on exposure. Without Google, if someone wanted to know who performed their favorite hit and accidentally came across a cover version, that would only benefit the young, budding artist.

Goldsboro recorded his version of “Honey” on Jan. 30, 1968 in Nashville at RCA Studio A. Producer Montgomery would later tell Billboard magazine that, “we cut it perfectly on the very first take. Everyone looked as each other as if to say, ‘Is that it? Did we miss something?’ We all knew the first cut was perfect, but we did it again just to be sure, and it came out just as good the second time through, so we went with the second take.” Even the session musicians who played on the record were confident in the song’s success, going so far as to call their wives over the phone just to play it for them.

Goldsboro and Montgomery had to stick to their promise to Russell, however, to keep their record sealed away until Shane’s chart run was over. According to Montgomery, Bob Holiday, promotions man for Decca Records, had been assigned to promote Shane’s record. He phoned Montgomery to call Russell and ask him to go ahead and issue Goldsboro’s recording because Russell was, “mad over at Decca or something.”

In actuality, Russell was likely madder at Holiday since Shane’s version of the song was going nowhere fast. That was only confirmed when Montgomery did call Russell who angrily said, “I don’t give a **** what you do.”

So Goldsboro’s version was rush-released on the United Artists label and, within its first three weeks on the market, sold a million copies, on its way to global sales of well over six million. It was the biggest-selling record worldwide for the entire year of 1968. As for Goldsboro, he would only reach the top ten in country once more in his career with 1971’s “Watching Scotty Grow.” Join me next time on ‘Pop Goes The Country’ where we’ll discuss Mr. Rhinestone Cowboy himself, Glen Campbell, not just once, but twice.