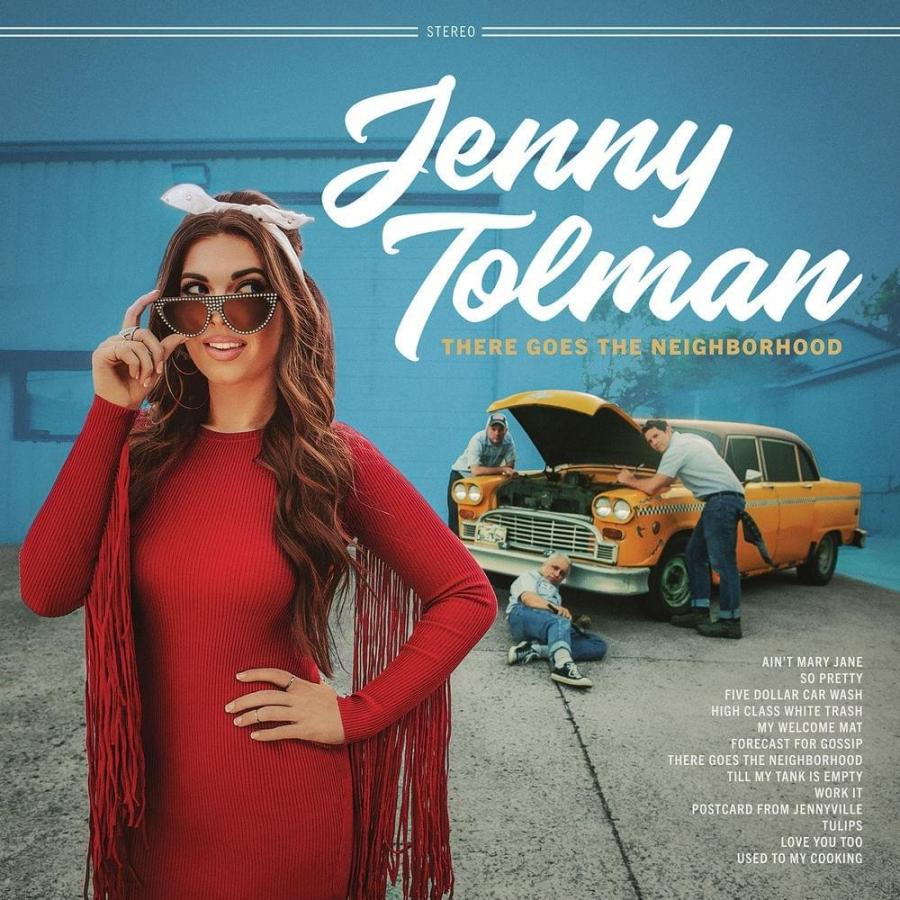 The short version: ‘There Goes The Neighborhood’ suffers from some inconsistencies, but overall it’s a unique debut album that carves out a distinctive lane for Jenny Tolman.

The long version: What is a debut album supposed to be, exactly?

In some cases it’s a classic, and at other times it’s a showcase for potential. But is there a specific box for what it should be? For country music, it’s especially crucial to understand that. After all, one flop single these days usually signals the end of the line for certain artists, and trying to just get off the ground to begin with is important (and difficult) as well.

Obviously, though, it isn’t always easy to know how to introduce yourself, especially in country music where the genre’s web presence is severely lacking compared to other genres. As much as we, the country music fans, don’t want to acknowledge this, the promotion and marketing behind the artist will sometimes be just as, if not more, important than the actual music.

But that doesn’t mean the creative side of the artist has to be stifled in that process, which brings us to Nashville native Jenny Tolman. Her debut album, There Goes The Neighborhood, came about after Tolman exited an abusive relationship and regained her creative spark. However, that wasn’t the inspiration for the album’s concept, but instead just Tolman’s way of tapping back into her childlike imagination to regain a part of her she’d lost. Some positive attributes leading up this were her citing Dolly Parton and Roger Miller (among others) as influences, and considering she was working with Dave Brainard on production duties (the same producer behind Brandy Clark’s 12 Stories, Sunny Sweeney’s Trophy and others), there was certainly enough reason to check this out.

Ironically, after droning on for several paragraphs before actually discussing the album in question, There Goes The Neighborhood is the kind of album that speaks for itself, at least in terms of introducing who Tolman is to the world. Centered around a fictional town called “Jennyville,” while I won’t say the album quite nails its concept as well as it could, this is still an album that carves out a very distinct lane for Tolman and introduces plenty of reasons to give her a chance.

Of course, figuring out where to start when discussing the album in detail is the hardest part. The album is interesting, sonically, playing to the same theatrical elements reminiscent of, say, Karen Jonas’s Butter from last year, only with a looser atmosphere. There’s plenty of dusty harmonica, saloon piano, fiddles, bright acoustics and ragtime trumpets to keep the album’s energy up and feeling cheerful without going overboard. Part of this extends toward the lyrics and themes, which we’ll be addressing later, but Jennyville isn’t meant to explore the perils of a small town or be a southern Gothic narrative in the same way that, say, Ian Noe’s Between The Country was earlier this year. Instead, you get the feeling that the town is supposed to reflect something of a Dr. Suess work, or if you watched Goosebumps as a child, Karlsville.

But the album’s best assets often lie in its presentation. Songs like “Work It” and “High Class White Trash” bounce off their lazy acoustic grooves to play off their playful infectiousness, and songs like “So Pretty” and “Used To My Cooking” opt for more serious messages by exercising restraint and are all the better for it.

With the electric bass driving the groove of “Work It,” it even has all of the sass of a ‘90s Shania Twain cut, and “Tulips” probably leans into its theatrical elements the most to deliver something bouncy and upbeat. And, on the note of the bass on “Work It,” it helps that this album even has enough support in its low end to drive these songs along without feeling overproduced. The interweaving of the fiddles with the pianos or handclap percussion work for tracks like “Tulips” and “High Class White Trash,” for example, respectively.

But discussing the album without diving into what Jennyville actually is would just be dancing around the main point. To get my main nitpick with the album out of the way, I’d say the album doesn’t explore the fictional town far enough in concept or explore other characters as well as it could. Part of this is intentional, as Tolman didn’t want to sketch a set town, but rather let listeners fill in the blanks with their own details. I understand the broad appeal, but it makes certain tracks feel like they’re retreading the same ground at some points or make other moments not feel as interesting as others.

If there’s an overarching theme to this album, however, it’s exploring the town through Tolman’s eyes herself and her experiences. She’s more of an average townsperson figuring out life as she goes along more than the narrator telling these stories as if she were some higher authority in town. For all of the childlike imagination that went into the creation of Jennyville, the album often, ironically, finds Tolman growing up and learning tougher lessons. But again, There Goes The Neighborhood isn’t meant to be some dark, despairing epic about a failing small town. The biggest bout of drama this album goes for is in the title track when all the women find themselves at odds in a hilarious fashion to win over a handyman, and while the album could have entered some dicey territory with that certain twist toward the end, it evades it by not making it the main punchline of the song.

Yet I found myself wishing there were more moments like the title track that went in a zanier direction or sketched out the town and its characters a little more. The commercials scattered throughout this album are fine, but they don’t really add much to the narrative, instead breaking up the cohesion, if anything.

Still, the album’s lighter feel means that it’s often trying to go for humorous, zany situations, and Tolman is certainly the kind of charismatic performer who can pull it off well. I wouldn’t say the album tests her technical range as a singer all that much, but she’s got a great voice, and the album certainly often finds her in a likable mold. Sometimes she’s calling out the small town hypocrisy of having of having to put on face and keep up appearances in “High Class White Trash,” if only because that will matter once the title track rolls along. On a technical level, though, “Postcard From Jennyville” goes in an unexpected direction, acting as more of a dreamier vocal showcase for Tolman and supported by classic, almost elegant instrumentation.

What surprised me most, however, was that, when Tolman does opt for something more subdued or serious, she’s convincing enough to never make the moment feel jarring. The best example is “So Pretty,” which plays toward ‘90s country balladry and shows a woman wishing she could hate the other woman stealing away the man of her dreams, and yet realizes that her anger shouldn’t be directed at her. For an album that leans into its silliness quite well, this moment of maturity is likely its best moment, especially when Tolman finds herself sympathizing with the other woman once the two lovers divorce by the end.

And it’s not like those darker moments don’t fluctuate on the album, but the impression one gets from There Goes The Neighborhood is that there’s always a silver lining at the end for these characters. No one is beyond saving, in other words. That’s what makes “Love You Too” a shockingly pertinent part of the album’s puzzle – an honest conversation where Tolman addresses herself to quit trying to be perfect and love herself instead, as that’s the only way she’ll ever be able to love others. I’m making it sound more corny than it really is, but it’s a very well done, revealing track on the album.

On that note, however, when the focus is on Tolman herself, there are moments that feel repetitive or are going for the same theme better elsewhere. The sentiment of acceptance on “My Welcome Mat” is nice and all, but it’s told in the most cloying way possible, and the sleepier, more serious mix does it no favors. It’s like the track is still trying to match the sillier lyrics with a more serious arrangement, and it’s just not as effective as when Tolman does add some bite to her performances like on “So Pretty” and “Love You Too.”

There’s also the two love songs, “’Til My Tank Is Empty” and “Used To My Cooking,” and they both work, sonically. They’re both driven off of warm acoustics with some fiddles, organ and steel guitar thrown into their respective mixes, but whereas the hook of the former track really goes nowhere in its meaning, the latter track is framed in a more honest light with a better hook, acknowledging that neither partner is perfect, but they’re going to try and make it work anyway.

And that’s what’s most likable about There Goes The Neighborhood – it’s fun, yet still carries a deeper, respectable subtext to it all. And going back to the question I posed at the start of this review, in terms of what this album accomplishes, it establishes Tolman as a distinctive artist in country music right now. Again, the main issues are simply with consistency, but as it stands, considering she counts Roger Miller as in influence, she’s certainly helping to bring back the zanier, fun side of country music in a unique way. With Tolman, you’ll know her songs when you hear them, and that’s not something every artist can say when starting out.

One thought on “Album Review: Jenny Tolman – ‘There Goes The Neighborhood’”