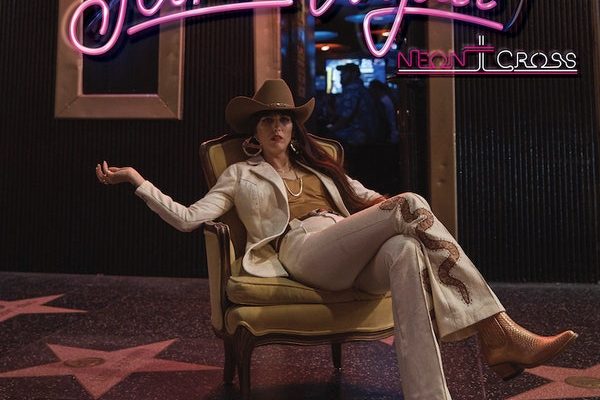 Neon Cross is an ambitious album for Jaime Wyatt, but lacks the same energy as her previous work.

Jaime Wyatt’s debut album was one of my most anticipated albums of the year.

And truthfully, it feels weird to call Neon Cross a debut, if only because 2017’s Felony Blues was not only a satisfying EP – but one of the best listens of the year, period. Plus, while there’s debate as to what an artist “should” do on a debut album or single, Wyatt’s incarceration story – which framed most of Felony Blues and felt relevant to American society and the prison-industrial complex even then – told her story in 30 minutes and never once felt lacking.

Now, with Neon Cross, Wyatt looks to move on from that past without letting it haunt her. And with Shooter Jennings’ hot production streak this year, barring, well, everything going on right now, this could be another breakout moment for Wyatt.

Truthfully, though, this may be a rare example of the EP feeling more satisfying than the actual album, as while Neon Cross mostly plays to Wyatt’s strengths, it’s missing the spark its predecessor carried. Part of this has to do with instrumentation and production, which is a shift away from the Bakersfield tones of Felony Blues into a distinct ‘70s outlaw sound akin to, say, Tanya Tucker. And on comparison alone, that’s good, but I’m always left wishing more from the mix from each listen. If there’s one element I’m beginning to notice about Jennings’ production, it’s that he’ll often fill in the low end of the mix with reverb over, say, a good bassline to supplement it, and it comes across as more conventional and comparable to the other burnished indie-country projects playing to this lo-fi, hazier sound.

Granted, I understand why to an extent – Wyatt’s voice is effectively pushed to the front, and she’s capable of the sort of plaintive sultriness that adds gravitas to her huskier tones. I may not agree with letting the drawn-out “Sweet Mess” open the album, but when the larger focus is on her, I get it, too. And while it’s never good to engage in too much hyperbole with these reviews, this is music that sounds like it’s emanating from those lonesome honky-tonks, where Wyatt is singing alone hoping someone will listen. It’s why there’s so much weight and emotion on presence alone on “By Your Side” and “Sweet Mess.” On the flip side, when she’s forced to grin and bear it as she endures the constant criticisms of her lifestyle and past on tracks like “LIVIN” and “Make Something Outta Me,” she’s able to convey a ton of rollicking charisma.

On that note, to make another comparison to Felony Blues, the themes from that record largely color this one, where Wyatt is now free and trying to make it in the country music industry as a gay woman. Of course, that only means the criticisms and ridicule come in multiple spades now, and Wyatt’s usual response is to either laugh it off or dare people to judge her. It’s a larger theme of acceptance that frames this album, where the self-deprecating humor on “Make Something Outta Me” and “Goodbye Queen” find her comfortable still trying to piece her life together and not let either her past or her critics define her; “Just A Woman” and the title track are both fairly blunt about that, the latter likely being the best song on the album.

All of that’s to say, too, how there’s a genuine sadness to the writing as well. Her pain of understanding what is only fleeting love on “Sweet Mess” and “By Your Side” is drawn-out and hits much harder because of it, and the Dax Riggs cover of “Demon Tied To A Chair In My Brain” ends this album on a much darker note than I was otherwise expecting. With that said, I do think the album could have tapped into those darker moments for a bit of a meatier pulse. There’s a righteous fury to the galloping groove of the title track (reminiscent of Wyatt’s own “Stone Motel,” not that that’s a bad thing), but “Hurt So Bad” scans as a bit more conventional for country-breakup-song standards and not as memorable.

It’s the closing track, though, where the issues with a lack of tempo or variety in the mix really start to show. The pedal steel tones are still rich and basically mark this entire album, but there’s also tracks, again, that feel sorely lacking and missing either a good fiddle pickup or bass groove now and then. Even on a note of mixing, however, there’s some slight inconsistencies. The blast of harmonica could have driven “LIVIN” pretty effectively, but it’s pushed to the back of the mix, instead. Or take “Just A Woman,” where the mellotron comes in out of nowhere toward the end and leads into an awkward keyboard tone that horribly dates the tune; the same can be said for the reverb-saturated, “Mercy,” too. It’s a sweeping, atmospheric album, but it often finds itself settling for a stuffy mix that runs together at points.

Still, for what is technically Wyatt’s debut album, there’s a lot to like here – even if I would recommend Felony Blues over this. The writing is sharp and holds nothing back, and Wyatt is quickly becoming of the most intricate vocalists working within the genre today. And when it just leaves the hooks a bit lacking and the production falling a bit flat, it’s a note on performance nitpicks that doesn’t subtract from what makes Wyatt a compelling performer.