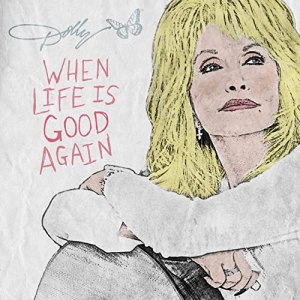 (Editor’s note: Kevin already wrote a song review for this over at Country Universe, so I’m writing about it here)

“When Life Is Good Again”

Leave it to Dolly Parton to halt the chaos of the world for just a moment.

We’ve had no shortage of tracks addressing the COVID-19 pandemic this year – both directly and indirectly – with some genuinely finding a spark and others … feeling less than satisfying (Kyle of Kyle’s Korner coined “Cobronavirus” a few weeks ago, which accurately sums it all up). The first step to getting it right, however, is acknowledging the damage already done and the potential dangers ahead, rather than, you know, masquerading those sorrows with dumb drinking songs.

In other words, we’ve needed Parton’s wisdom for months now, and with “When Life Is Good Again” … eh, we sort of get it, and we sort of don’t. Parton hasn’t lost any vocal or emotive power over the years, and there’s a slight crack in her performance that notes the pain she’s trying to convey about the current situation. But the writing mainly coasts on vague platitudes that, while hopeful, also feel empty and forgotten by the time the song ends. Granted, credit is due to Parton for at least acknowledging her own faults with her past self before the pandemic started and how she’d like to rectify them, and her performance is enough to sell the notion that she’s going to try and make right on her promises. Plus, her way of mining optimism and hope while still addressing the dark undercurrent is basically her lyrical trademark.

With that said, we also need to think about the kind of world we’re returning to, and while life will eventually get “good” again, it doesn’t mean the only change needed is of a personal variety. But I’m wading into another conversation with that, so I’ll say that I’m only somewhat sold on the writing.

The production is about what one would expect for a country power ballad like this – strings, electric guitar, slight synthetic elements for atmosphere, piano and a choir – and I’m just left wishing the song ended as gentle as it began. Not that a noticeable choir and increased tension and momentum to the performance is bad, mind you (I’m all for it for some tracks), but here it drowns the message and drags the song without much reason at all. It’s an overall predictable choice that leans a bit too heavy on sappiness over nuance.

Still, I won’t begrudge fleeting optimism in these times, and even when she’s not at her best, Parton still manages to deliver a more compelling performance than most who’ve tried to address our current situation.