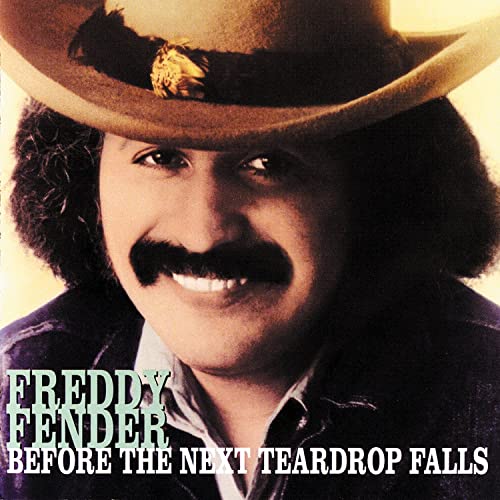 ‘Pop Goes The Country’ is an ongoing series where I explore country music’s biggest crossover hits.

It’s amazing just how many of country music’s biggest hits were accidents.

Today’s focus, “Before The Next Teardrop Falls,” took a total of 32 different recordings from different artists before Freddy Fender recorded the definitive version, and the ironic part is that he was relatively unknown when he recorded his biggest hit.

Before Fender came into the picture, however, “Before The Next Teardrop Falls” was conceived as a routine writing to appease higher-ups at a publishing company. Working as a professional manager for Fingerlake Music Publishing Company in Nashville, Tennessee, Ben Peters was one such example of something just doing his job, yet obviously doing it well. Peters had already struck gold with Eddy Arnold’s No. 1 hit, “Turn The World Around,” but the secret to lasting success in Nashville is being able to do it again … and again. One evening, his secretary, Vivian Keith, suggested he do something around the title “Before The Next Tear Falls.” Peters agreed to the project, went home, and wrote most of the song that night, finishing it the next day; he then adjusted the title to what it’s known as today.

And thus began the song’s long history: Duane Dee had cut the song for Capitol Records in 1968, but he was drafted for military service once the song was released, resulting in the song’s premature death on the country music charts. Linda Martell had a version of the song land at No. 33 in 1970, and then, as the story goes, 30 more people recorded lesser versions of it before it made its ways into Fender’s hands.

Again, though, Fender was just as likely to fail with his version as anyone else. Born in San Benito, Texas as Baldemar Huerta, Fender’s life was much like a country song. He traveled with his family of migratory workers across the United States when he was young; following harvests, he picked beets in Michigan, cucumbers in Ohio, hay and tomatoes in Indiana and cotton in Arkansas. After joining the Marines for three years, Fender entered the music business.

Fender was off to a rocky start in more ways than one, though; Tex-Mex recordings of his became hits in his local area, in Spanish, and one of his own compositions, “Wasted Days and Wasted Nights,” became a regional hit. But in 1960, Fender was arrested for marijuana possession in Baton Rouge and spent three years in prison. Redemption came, however, when Fender returned to play gigs in New Orleans, returned to San Benito, became a mechanic, received his high school diploma, and enrolled in college sociology courses.

How and why isn’t very clear, but in September 1974, Fender, recording an album of “Tejano Rock” and “Swamp Pop,” was approached by producer Huey Meaux. Meaux had approached Fender about possibly recording the song and even supplied the instrumental tracks already recorded, meaning all Fender would have to supply is the vocal performance. As mentioned last week with Billy Swan’s “I Can Help,” the mid-’70s were turbulent times for country music, with the debate surrounding what was and wasn’t country music spark back up in the midst of heavier crossover success.

Fender was opposed to covering anything country, but made an exception due to Meaux’s sheer excitement of the track’s potential with Fender’s recording. It’s hard to answer why these crossover hits resonate the way they do, and that’s never been more fair to say with Fender’s recording of the song. That’s not an indictment of its quality or Fender’s natural talent, but rather the song’s history and Fender’s own struggles with the song’s release. By all accounts, “Before The Next Teardrop Falls” wasn’t looking like a huge hit at first, only managing to muster up a No. 96 debut on Billboard’s Hot Country Singles chart on January 11, 1975. In a nutshell, it was the worst debut ever for a future number one record – but it gained momentum, eventually reaching that No. 1 position in March. Eleven weeks after reaching No. 1 on the country chart, the record also topped the Billboard Hot 100 pop chart on May 31, 1975. Country music wasn’t such a bad look for Fender after all.

Still, country music wasn’t his first love. During his brief time in the spotlight, he scored eight top 10 country hits, including four No. 1 singles. After that, he returned to his roots as a Tejano singer. That is, after all, where his passion truly was, though as he was dying from cancer in 2006, one of his final wishes was to become the first Mexican-American inducted into the Country Music Hall of Fame. Sadly, Fender’s dream hasn’t yet come to fruition. Join me next time on ‘Pop Goes The Country,’ where we’ll discuss BJ Thomas and a song about heartbreak, because this is, after all, a conversation on country music.