Hey, here’s a surprise release I’m surprisingly late to covering in full. Of course, I’m also not sure how much I can say about this release, given that it’s basically one long single from Tyler Childers anyway.

Even that feels like an unfair description, though. What Long Violent History is, essentially, is a collection of mostly old fiddle tunes meant to support the final song, the title track. And that’s the thing – that buildup is needed when it comes to the song itself, which, instead of preaching to a choir – and I’ll admit there’s a lot of that in independent country music right now – asks for empathy for black Americans from those that Childers knows comprises his core audience. And that’s a head-on perspective that’s rarely been explored this year in country music, with Childers putting himself on the same level as his audience instead of acting like he’s above them, or that there aren’t otherwise good people who may just need to hear an important message right now. And how fitting it is that the old-time aesthetic only further emphasizes how little progress we’ve made in trying to communicate that message.

As for the rest of the album … I’m of two minds on it. On one hand, it’s obvious that Childers’ fiddle-playing skills aren’t extraordinary, and that the pieces chosen are fairly rudimentary for the style. Speaking as someone who has always respected Childers’ work more than loved it, though, it feels weird to call this my favorite album he’s released so far. One of my biggest complaints with his past projects was that the overall instrumentation and production felt a bit too polished and safe, and while that’s not the case here, I’m not sure something this rough is what I had in mind either. There’s plenty of banjo and acoustic accompaniment to do the heavy lifting for the technical fiddle play, but even just for a pure listening experience, I’m more likely to revisit, say, Hawktail’s Formations than I am this.

That’s not saying it’s bad, though. On the contrary, for as messy as this album’s arrangements are, the intent and sequencing are not, beginning pretty gently with “Send in the Clowns” before reaching a pretty solid middle point with some of the more frenetic cuts in “Squirrel Hunter” and “Sludge River Stomp,” and coming back down with “Midnight on the Water.” Even speaking as someone who likely overthinks everything with these types of albums, though, the most I can call this is an oddball collection that has a unique purpose in mind and achieves it fairly well, with a title track that’s worth the price of admission alone.

A simple opening, I know, and when the artist in question takes four years to release another album, that statement should speak for itself as a fan simply wanting new music from one of the best acts working adjacent to alternative country music these days.

But no, I mean “finally” in that, it’s been a long time coming for Lydia Loveless to even be able to release Daughter, from going through a divorce to moving to North Carolina and, finally, releasing her music independently after repeated instances of sexual harassment at Bloodshot Records – and if you’ve been following the news surrounding that record label for the past, oh, year and a half, don’t expect any new music from your favorite artists on that label anytime soon, either.

For now, Daughter is here, and given how Loveless has expanded her sound over the course of her past few albums, it’s understandable why this is a more low-key release, shifting more toward – and this will sound weird, I know – a ‘70s Fleetwood Mac Rumours-inspired sound, particularly in the liquid bass grooves anchoring this album. Now, I’ll be blunt and say that, speaking as someone who always enjoyed the rebellious firepower of her earlier works, Daughter is probably my least favorite effort from her. That it’s still great and will likely only keep getting better with time, though, speaks to her performance and songwriting abilities.

In fact, that may be the easiest starting point here, where the writing tackles the divorce head-on and works it way toward finding comfort and closure … only, this is Loveless, and her approach to writing about love has always been complicated. Not hopeless, mind you, but complex enough to not sugarcoat what went wrong or what it even all means in the end. And that closure never quite materializes because of the messy framing. Take “Love Is Not Enough,” for example, where Loveless breaks down how love wasn’t enough for her own relationship, but also tackles the concept in a general sense, noting how peace only comes through action – and what actions do you take when it’s just simply … over? There’s lessons learned here, for sure, but it’s often too late. She expresses regret on “Ringer” and “Can’t Think,” especially when she knows both her and her ex-significant other contributed to the demise, but she also knows it’s not worth dwelling on what could have been, either. If anything, while there may not be anything to show for the years together, they’ve both grown as people. And that comes to a righteous climax with the title track, where, ultimately, Loveless is her own person who owns up to whatever mistakes she’s made and will move on without succumbing to any outside judgment.

Ultimately, too, I keep drawing comparisons to recent albums from Jason Isbell and Ruston Kelly, which are both fried and tired compared to earlier works, but still compelling all the same, albeit in a lighter, more contemplative sense. Plus, when there’s still a firm emphasis on mix dynamics even within the limited scope, it makes for some compelling moments: from the groove-heavy sway of the electric guitars against the murkier bass on “Love Is Not Enough”; the low-end growl of the guitars on “Can’t Think” that only gain more presence as that track spirals out of control; the weathered interplay of the bass and piano for a fantastic melodic progression on “Never”; to the warped, hazy, liquid synth tones of “Don’t Bother Mountain,” which is probably the one track pushing Loveless’ sound forward while also criticizing those, like, you know, me, who might overthink this album entirely, when, really, she’s moved on at her own pace. Well-played.

Now, again, even for as subtle as this album is, I do think certain moments get underplayed here. There’s a darker undertone to “Say My Name” that I don’t think gets emphasized enough from the languid instrumental tones, and that’s before mentioning how certain tracks here get repetitive by the end – “When You’re Gone” is nice enough, but it had more punch when it was called “Heaven.” Still, it’s been a long time coming for this album, and it’s well worth the listen. 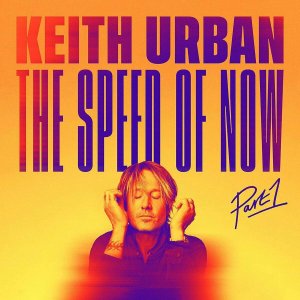 This will sound harsher than intended, but Keith Urban’s attempt at fusing country and pop music hasn’t felt genuine since 2013’s Fuse. And I use that as a reference point because, unlike fellow aging contemporaries like, say, Luke Bryan or Jason Aldean, I believe Urban has mostly acted with good artistic intentions. I wouldn’t call him an essential act of the past few decades, but he carries a rare sort of ambition to his work that I can respect. The problem isn’t that he’s pushing further into pop music, it’s that the pop tones he’s choosing are trendy, choppy and cheap-sounding enough to make his works feel clumsy and dated. If Graffiti U proved anything, it’s that Urban is at his worst when’s trying to remain relevant.

THE SPEED OF NOW Part 1, then, is both a slight improvement from that catastrophe and another exercise in wasted potential, where Urban will only flex his guitar skills on two of the better tracks, “Live With” and “Forever,” while letting overmixed percussion and cold synth tones and drum machines rule the rest of this album. Again, the issue isn’t so much the style choice as it is the tonal usage, though I wouldn’t call much of this album country in the slightest. For an album aiming for higher lyrical ambitions in trying to meet a dark moment in time, you’d think there would be a stronger emotional nuance or brighter demeanor to add life to these songs. Instead, the awkward blend of nasal backing vocals, clumsily mixed instrumentation and bad percussion overwhelms this album to only a slightly lesser degree than his previous albums.

Sure, the grooves are a bit stronger this time around, but none of these tonal choices suit Urban as a performer, who carries a ton of earnest charisma, but often oversells many of the ballads and other sentiments here. Of course, that’s also a note on his guest stars, namely how bringing on Eric Church for a duet version of his own “We Were” highlights how much of a better grasp Church has on subtlety. And that’s before mentioning how he often gets trumped by his collaborators in general, including with BRELAND on “Out The Cage” and P!nk on “One Too Many” – it’s not a good look when Kenny Chesney has the better P!nk duet.

Of course, I’d argue Urban’s songwriting is just as clumsy as his production these days – even if he only wrote a small chunk of this album – and how fitting that I’m covering Tyler Childers in this roundup post, given that his own “Long Violent History” is a much better version of Urban’s nondescript “Say Something” – especially with that awful falsetto on that hook. But the issues mostly show themselves, namely in the predictable yet out-of-place “Johnny & June” reference on “Superman” to him singing “I’ll be your Billy the Kid” on “Tumbleweed” as he tries to sell himself as a wanted outlaw. It’s an album aiming for good intentions in places, but when he’s singing about youthful days gone by on a good chunk of this album, it feels as nondescript and weightless as most tracks in this vein in the 2010s, especially when we had a lot of them in country music. Again, at least “We Were” carries some strong imagery through Church’s songwriting; “Polaroid” and “Superman” are about days gone by that weren’t worth remembering to begin with. And when the other underlying thematic arc here is the “savior” complex – which I already discussed when I reviewed “God Whispered Your Name,” and not in a favorable manner – it doesn’t help when you have a track called “Soul Food,” leaving me to have to point out why framing your significant other as food that’s good for the soul leaves you wide open for some obvious jokes.

It lacks the obvious low points of Graffiti U, for sure, but this is a bloated release that’s well beneath Urban’s talents, and I’m tired of having to repeat that with every new album release from him.